She keeps thousands of teeth: some are stored in bottles, others in cases or under glass. One was extracted from a prehistoric cave in Europe and dates back some 26,000 years. Another fell from the jaw of a woolly mammoth far before that. She has hundreds of skulls, “crutches” (dentures), tooth powder boxes and instruments. Among her collection she prizes four scratchy, red velvet-covered dental chairs from the 1860s, and a T. Eaton tooth powder bottle with a little rubber stopper.

Unlike the tooth fairy, she doesn’t collect teeth for coins.

But at a gala dinner late last month, Dr. Anne Dale, curator of the Faculty of Dentistry museum, was recognized by the American Academy of the History of Dentistry (AAHD) with the Hayden-Harris Award. The award honours Dale’s ongoing and vital contribution to preserving the history of dentistry. 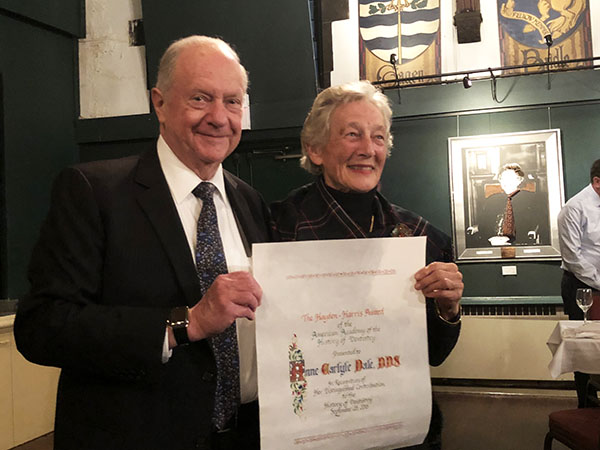 “[Dale’s] passion and personal commitment through the collecting, documentation and preservation of objects, materials and papers of cultural and natural history not only preserves our heritage but also demonstrates the overlap of the art and science of dentistry,” said Dr. David A. Chernin, executive director of the AAHD, in a statement.

Dale was not the Faculty’s first keeper of teeth: the Dentistry museum has actually been a continuous collection since 1869, when the original school, operated by the Royal College of Dental Surgeons, began advertising for specimens for a dental museum. When the school joined with the University of Toronto in 1888, forming Canada’s first Faculty of Dentistry, the collection was rolled into it.

I was downstairs in the ‘dungeon’ with my two babies, who had to be good while we did our museum stuff

Dale’s passion for curating Dentistry’s past sprouted in the early 1960s. She and her husband, Dr. Jack Dale, both alumni from the class of 5T8 (Jack Dale graduated at the top of his class; Anne Dale second), came back to the Faculty in the early 1960s to teach, after both had completed internships at Harvard.

In 1964, the dean of Dentistry sent the couple to Cooperstown, NY, to take part in a two-week museum studies course. Soon after, Jack Dale was named the official Faculty librarian and curator of the museum, a position that he would hold for another six years.

Behind the scenes, Anne Dale was always there, working beside him. “I was downstairs in the ‘dungeon’ with my two babies, who had to be good while we did our museum stuff,” says Dale.

For Anne, it was never about the official title. She and Jack were a team. “We were really soul mates,” says Dale of her late husband, who passed away in 2016. “We always worked dovetail. We did everything together.”

In 1970, Jack Dale stepped down from curating and teaching while he pursued his successful orthodontics practice, and the curator position was discontinued. Anne found herself out of her hobby, and the museum out of a home — the space was turned into a student services office, and for over a year the vast collection sat in boxes in the building’s underground parking garage. Anne Dale claimed back the space for the museum in the late 1980s. It wasn’t until 1998 that Dr. Anne Dale was made the Faculty’s “honourary curator,” though she had been collecting, restoring and purchasing items for decades before that.

One of the crowns of Dale’s collection is the envy of war museums across Europe: a series of dental instruments fashioned out of telegraph wire, railway spikes and cookie tins. The maker is a UofT alumnus originally from the Netherlands. While sailing to Indonesia during WWII, the dentist’s ship was sunk, and he was taken as a prisoner of war. One of his captors developed a serious oral abscess — a potentially life threatening condition — so the dentist fashioned his own instruments out of found materials to treat him.

Over the years, the UofT Dentistry museum’s fame — and that of its curator — has spread far and wide. People from across Canada and beyond, many of whom are alumni, send Dale items they think she’ll enjoy: teeth, books, skulls. She describes this as the objects “making their way home.”

Just a few weeks back, an instrument box came to the museum, once owned by the only woman (and from India) to graduate with the class of 4T2. That year, at the end of the convocation ceremony, says Dale, all but three members of the class marched down University Avenue and signed up to fight in the war. Being female, the owner of the box was unable to enlist… so instead she drove a lorrie. 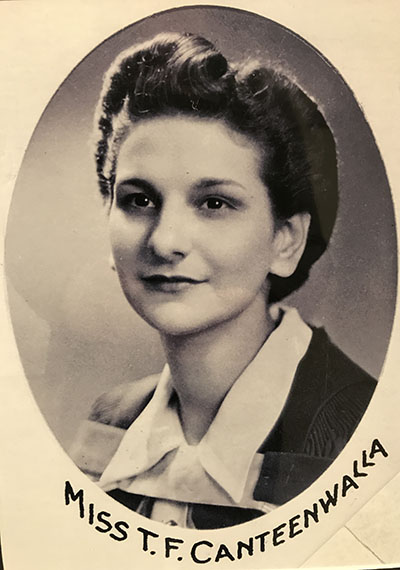 Dr. Canteenwalla - first Asian woman to graduate from Dentistry in 1942

For Dale, each tooth, instrument or box is far more precious than a tooth fairy’s gold: the items in her collection define dentistry’s devotion to healing. “The museum is the spirit and soul of our whole profession. It’s our memory. And it’s very important for us to have a memory.”