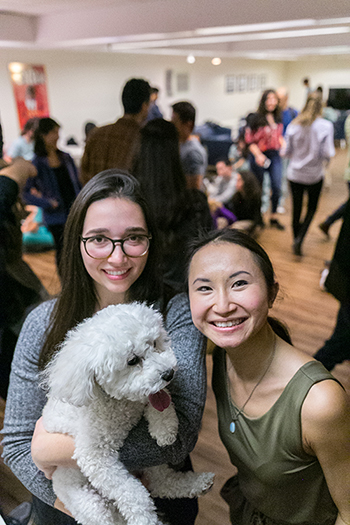 ent brought together students, faculty and staff with a number of shaggy, four-legged friends.

“The idea started from a news article I read in the American Dental Association,” explains Liu of her committee’s latest initiative. “In the article, a paediatric dentist was using his therapy dog in the dental clinic to help kids with dental anxiety,” adds the fourth year student.

The event’s visiting dogs, which ranged from the small to the large, were owned by staff, faculty and students, and had only to fit certain criteria: they had to be well-behaved, non-shedding and hypo-allergenic.

The DSS wellness initiative was spearheaded by the DSS council last year, when the council began “Wellness Wednesdays.” Liu, who has a passion for nutrition and yoga, was a natural fit for the position of wellness officer. A certified yoga instructor, she now leads her fellow students and staff in lunchtime yoga classes, as well as colouring therapy sessions. Last year, Liu also organized free massages to students through a lottery system.

“I thought getting dogs at the school close to exam time would create more smiles, reduce stress and anxiety from exams, and get students and staff who don’t normally come out to social activities a great incentive to come out,” she relates.

Several canine friends were present for the petting session. And, claims Liu, who wanted to thank all the participants and organizers, “The even was a huge success and had a higher turnout than last year.”

The dogs were all smiles, too.